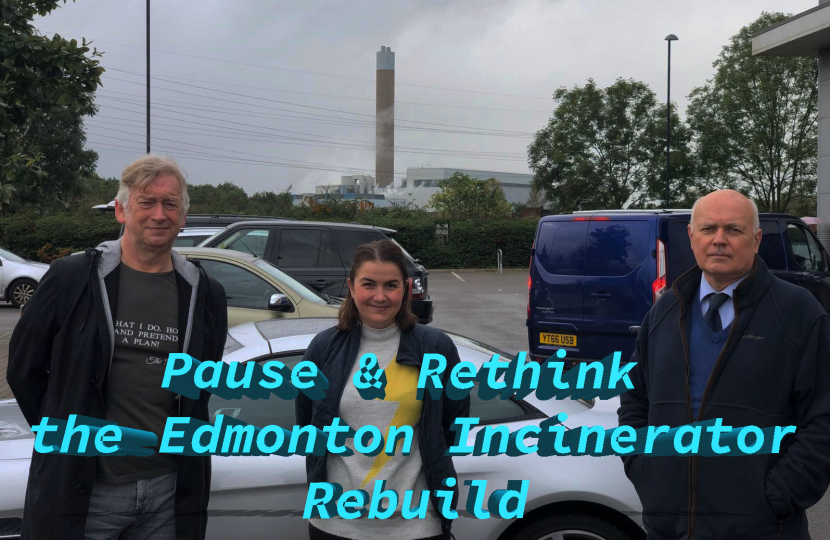 I have written and spoken to the Secretary of State for Business, Energy and Industrial Strategy asking for a value for money review, about the proposals put forward by the North London Waste Authority (NLWA) to replace the incinerator at Edmonton EcoPark. The plans in their current form will increase the capacity of the current incinerator by at least 30 per cent. I believe this will be detrimental to the wellbeing and health of my constituents and will not be good value for money or an astute public health decision.

I have asked for a review as the costs of this project have spiralled. The initial budget of £650m has almost doubled to £1.2 billion - a figure that still only includes construction costs and excludes the operating, environmental and public health costs which will undoubtedly occur. In the light of the rising expense, I am campaigning along with local councillors, Valley Councillors, Jemma Hemsted and Alan Siggers and Conservative North East GLA Assembly Member Candidate Emma Best, for an independent Value for Money Review to be carried out to assess whether the size and scope of the project is still necessary and returns a good investment for the taxpayer.

The plans to increase the capacity of the incinerator will mean it is three times too large for North London's needs. The proposals to expand were drawn up despite waste generation falling year on year since 2015. We are all concerned to hear of the plans to transport waste to Edmonton from across London and further afield which will only increase congestion and pollution.

The plans will also have a considerable environmental and health impact on residents. 700,000 tonnes of waste will be incinerated every year releasing ultra-fine particulate matter, which have been linked to early mortality, over my constituency and the local area. The current proposals do not include a cumulative health impact assessment for those who live within the trajectory of the plumes released from the incinerator.

Enlarging the incinerator will disincentive recycling and mean that North London will continue to miss recycling targets by a considerable margin. NLWA already burn over 320,000 tonnes of waste that could be recycled or composted.

My debate in Westminster Hall to consider the potential environmental and health impacts of the proposed expansion at Edmonton EcoPark.

GLA member Emma Best AM and I joined Dr Ed Tranah, local resident and doctor at North Middlesex University Hospital NHS Trust, talking about why he is worried about plans for a new and expanded incinerator at Edmonton.