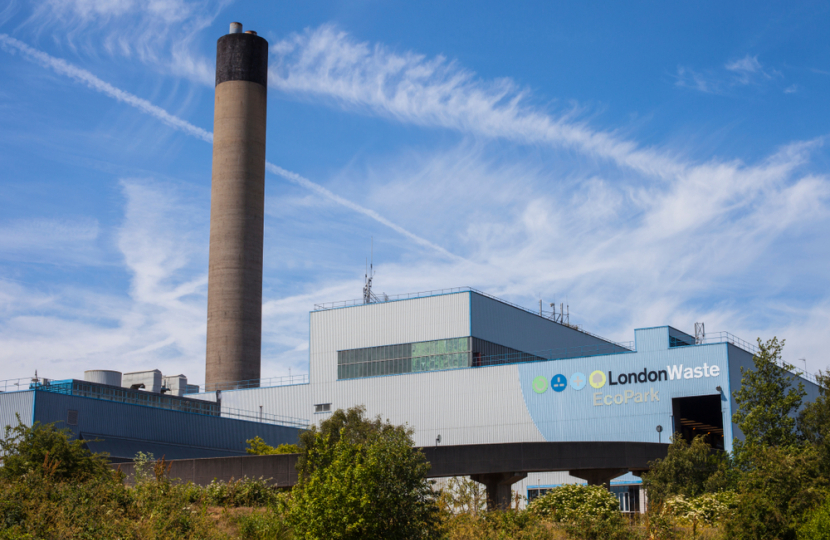 My debate in Westminster Hall to consider the potential environmental and health impacts of the proposed expansion at Edmonton EcoPark.

I have been deeply concerned about the way in which the expansion process has been going. The incinerator that was built originally is about to be significantly increased in size. This is a cross-party issue, not one that divides along normal party lines, because it affects ordinary people in many areas not just Chingford & Woodford Green.

The incinerator sits like an eyesore just below my constituency but, because of the prevailing winds from the south-west, the whole constituency is hit by what comes out of the chimneys.

I paid tribute to the active local campaign group, Stop The Edmonton Incinerator Now which represents the feelings of many of our constituents. Carina Millstone in particular, and others, have been active on this issue. That is a good sign of how local politics is alive and well and talking about real issues.

I do not think that the incinerator expansion is a good return for taxpayers in our constituencies. The costs have spiralled, almost doubling from the original £650 million to £1.2 billion now, and nothing has yet been built. The North London Waste Authority has already spent £4.3 million developing plans for the new incinerator.

Everywhere, I and other Members have asked for a value for money review of the project, from the Public Accounts Committee right the way through to every single Department and pretty much every single Secretary of State.

In normal circumstances, with a budget of £1.2 billion, might someone not want to ask whether a project still represents good value for money? However, nobody seems to say that they will take responsibility for it in Government or local government. It appears that the only body that is capable of reviewing or changing the project is the North London Waste Authority itself. In a way, it sets the exam question and answers it for itself every time. That cannot be right.

The NLWA had a long-standing goal of reaching a 50% recycling and composting rate by 2020, but it is currently still below 30%. If it had got to the 50% marker, there would be even less reason for the incinerator to be there for the local area, and the plan was that it was for the local area—north-west London. I am therefore concerned about the plans because they are no longer about north-west London. To make the project viable, we will now have to drag stuff all the way across London to keep this thing burning. Now we are going to have more traffic on the road, extra fumes and extra environmental damage—just to keep an incinerator going.

There are serious health implications for our constituents if the expansion goes ahead. Some 700,000 tonnes of waste will be incinerated every year, releasing what we call ultrafine particulate matter over residential areas.

We already have many hotspots in my constituency where air pollution is above the World Health Organisation’s air quality guideline levels. Asthma UK and the British Lung Foundation have calculated that 100% of schools, GP surgeries and care homes in my constituency are in areas that are already above the recommended guidelines. Even before any attempts to expand the Edmonton EcoPark, air pollution is having a significant impact on the health of residents across the constituency.

I have raised this issue with the Department for Business, Energy and Industrial Strategy, with Housing, with the Chancellor and even with the Prime Minister. Civil servants have said constantly that it is not feasible to intervene, but the North London Waste Authority, surely, somewhere along the line, needs to be held to account. What more evidence do we need?

Here we have the intransigent, inflexible, arrogant North London Waste Authority—and I mean arrogant, because at hearings it has just swept evidence from doctors and scientists to one side—refusing to budge on a policy that is clearly wrong and that is failing. It is a shameful state of affairs when a public body can no longer be held to account, because it no longer represents what the public want.

When something goes so badly wrong, the Government have to look at it again and ask how it can be that, amidst spiralling costs, health damage and pollution issues, we still plough ahead with a technology that is no longer needed and that will damage people’s lives in my constituency and others.