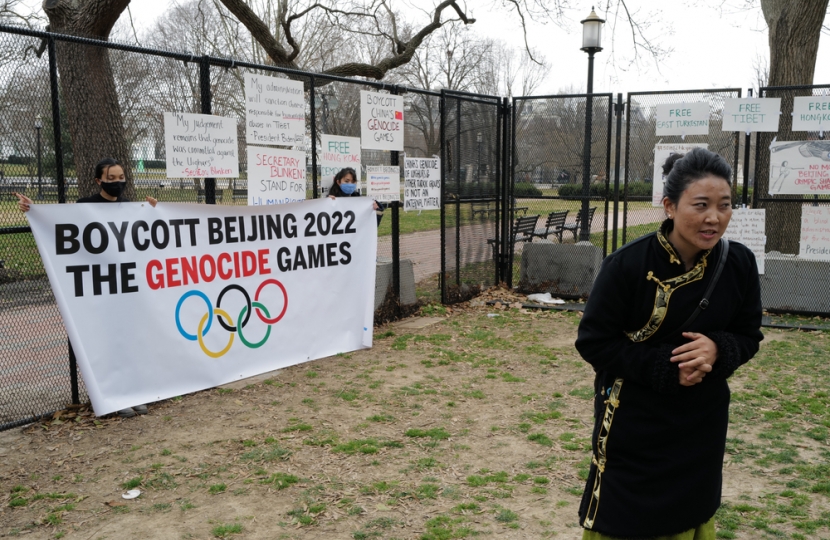 The Olympic Games should be an opportunity for people across the world to unite in a shared celebration of sport which should transcend national and political divides.

Yet, less than three months from now, the Beijing Winter Olympics will take place amidst a brutal campaign of repression against the Uyghur people. The Chinese government’s abuses in the Uyghur Region have been declared by experts and parliaments the world over - including our own - as constituting a Genocide and crimes against humanity. From forced sterilizations to mass internment camps and widespread forced labour, the Chinese government’s actions in the Uyghur Region are redolent of the darkest chapters of the 20th century.

Against this background, it is unthinkable that the Beijing 2022 Winter Olympics should continue as normal. Of course, it is right that sport should stay above politics, but this does not permit turning a blind eye to industrial scale human rights abuses. These concerns can’t be brushed off as mere politics. At stake is the fundamental principle of human dignity that forms the foundation of the international cooperation upon which the Olympic Games depends.

Our athletes have played no part in choosing the venue for the Games, they should not be made to suffer for the moral ineptitude of the International Olympic Committee. While many will boldly choose to speak out against the abuses, it is down to our political leaders to make clear that the Chinese government’s behaviour is unacceptable.

The British government must set an example to President Biden and announce a diplomatic boycott of the Beijing Olympics. Neither Prime Minister Boris Johnson nor any other government ministers or officials should attend the Games. British diplomats should too be instructed to stay far away.

Failure to do so will give free reign to the Chinese government to conceal the crimes taking place in the Uyghur Region and elsewhere in China. President Xi will not be the first dictator to use the Olympics as a cover for his authoritarian regime. He knows that the world is waking up to the truth of his heavy-handed repression and is desperate to show his government in a positive light. Any British government officials attending the Games will be willing and complicit actors in the Chinese Communist Party’s propaganda machine.

There is unquestionable support for these moves in the UK and internationally. In July this year the Commons voted in favour of a diplomatic boycott of the Games unless the atrocities in the Uyghur Region are ended and the Chinese government lifts sanctions placed on me and my parliamentary colleagues. The cross-party Inter-Parliamentary Alliance on China (IPAC) has led similar action in over 10 parliaments internationally, with the European Parliament also instructing European officials not to attend the Games.

Staging a diplomatic boycott of the Games is only the start in beginning to hold the Chinese government to account. Our commitments under international law oblige us to act when people groups are at serious risk of genocide, and yet still Chen Quanguo, the top Chinese Communist Party official in the Uyghur Region, remains unsanctioned by this government. The Sino-British Joint Declaration on Hong Kong lies in tatters and still no accountability measures have been taken, while the youth of Hong Kong have been wrongly excluded from accessing the British Nationals (Overseas) visa scheme.

As the Beijing Winter Olympics draw closer, it is time for the UK government to up its game.