With China behind Russia, we face a new axis of tyranny. 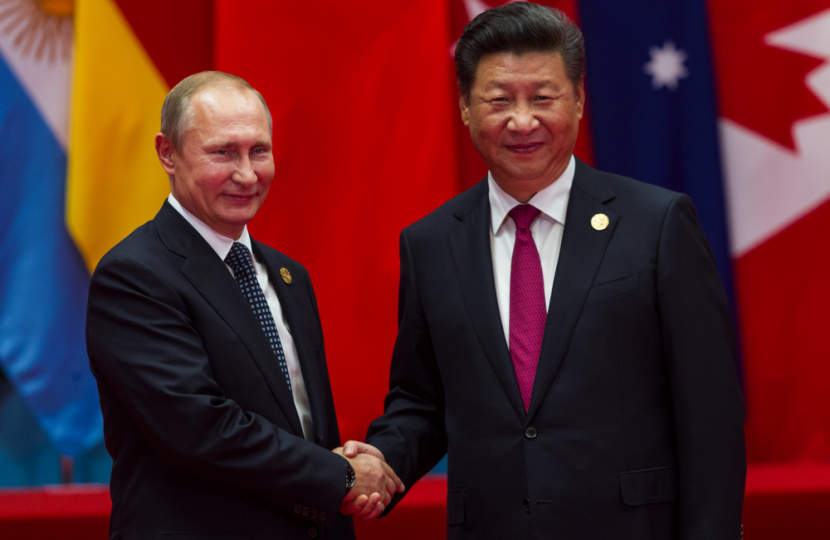 Vladimir Putin is giving the world a brutal lesson in how history repeats itself – and demonstrating how wrong and weak the West has been these last decades. It’s not as though he didn’t send us all strong signals that he intended to return Russia to the control once exercised by the Soviet Union. After he picked off Georgia, Crimea and the Donbas region, worse than doing ­nothing, France and Germany in 2014 appeased him. Gas, oil and corrupt money invested in Europe spoke louder than freedom. Putin believes that the feeble West won’t be able to stop him, and our catastrophic and panicky retreat from Afghanistan will have reinforced that belief.

The lesson Russia and China learned is that the West doesn’t stand by its friends. Just look, as Putin invaded Ukraine, Germany was slow to kick Russia out of the Swift system of bank payments because that is how they pay for their gas from Russia. And don’t be fooled by the announcement by Germany that they aren’t going ahead with the new Nord Stream 2 pipeline. Gas still flows into Germany thanks to the other Russian pipeline now operating at full capacity. Putin even has a back-up plan if Europe decides to turn the gas off. China, that rapacious ­consumer of all things Russia produces, from gas to wheat, will buy the lot.

Thus the money will still flow in and Putin believes he can ride out the storm of financial sanctions, waiting for the West to break ranks, as they have often done before. China’s President Xi Jinping and Putin have a sweeping long-term agreement that challenges the US as a global power and Nato as a cornerstone of international security. They also challenge liberal democracy as a model for the world.

“Friendship between the two states has no limits”, they agreed at the Beijing Winter Olympics. No surprise then that the value of goods exchanged between China and Russia rose last year from 108billion dollars to 146billion dollars — and the West’s new sanctions will only increase that bond further. That is why China, which has brilliantly used the free market to attract the West’s billions and buy output for its own products, plays a critical role.

From plastic goods to ­computers, China has made the West utterly dependent. Using that wealth and dependency, President Xi is set to surpass the US and the rest of the West, economically and militarily, and he is well on track. Like Putin, President Xi has no regard for the postworld war rules-based order — China’s sphere of influence is China’s concern and ­nothing to do with others. See the brutal takeover of Tibet, the illegal militarisation of the South China seas, the persecution of people in Hong Kong and massive genocide of the Uyghur people.

The West now faces a new axis of totalitarian states which poses the greatest threat to our principles of democracy, human rights and the rule of law. Government after government has turned a blind eye to the brutal excesses of these countries as our dependency grows. China and Russia understand how to capture the personal and national greed of the West. As in days gone by, those in the West who have been warning about this threat have been ignored. The stubborn belief that the free market would ensure the triumph of democracy everywhere has failed. Instead of strength, the West has been tearing itself apart over culture wars. While Putin revives pride in the Russian past, the West has been deleting whole ­sections of its own history.

No wonder dictators like Xi and Putin believe we are decadent and weak.

Some leaders are too busy virtue-signalling to meet the demands of establishments riddled with political correctness.

Ukrainians are putting their lives on the line for freedom while woke cancel culture seeks to strip it away.

Riven by the culture wars which demand we sit in judgment of what happened hundreds of years ago, we are now in danger of losing the future.