It's time for the Government to get tough on dognappers 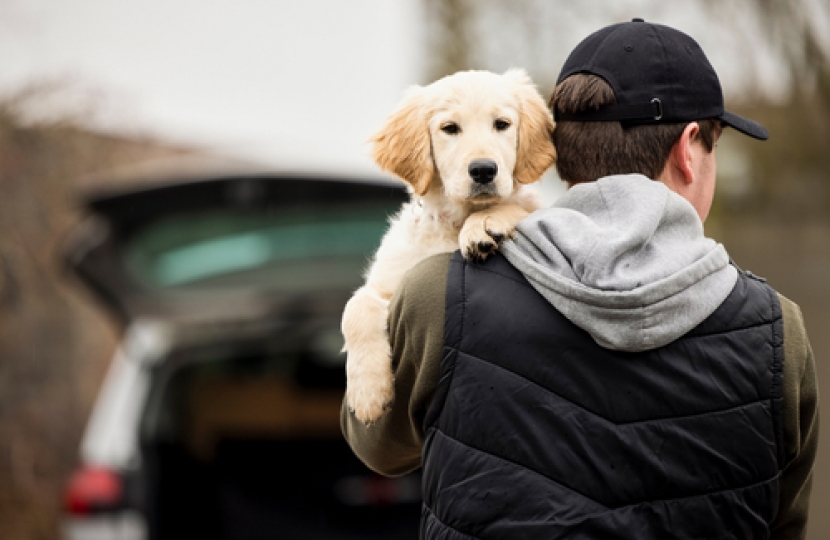 I know that the theft of pets, particularly dogs, has been an issue for a number of years. But I didn’t quite grasp the growing scale of the problem until it was brought to my attention by a constituent who had been assaulted and her dog taken.

In Suffolk alone, there has been a 250% increase in dog theft crimes year on year. In London, too, the Met has reported the highest number of dog thefts in the country. And in 2020, the number of stolen dogs registered on the DogLost website increased by 170% - making last year one of the worst on record for dog theft. As the crimes build up, I am worried that someone, somewhere will soon get seriously hurt.

In the US, in fact, it’s already happened: in a horrific incident yesterday, Lady Gaga’s dogs were stolen and her dog walker shot.  Covid, of course, has compounded the problem - both here and abroad.

With the world in lockdown and millions of people stuck at home, interest in dogs has rocketed: since the start of the first lockdown, internet searches for ‘buy a puppy’ have increased by 115%.  Yet because of lockdown, legitimate breeding has fallen off a cliff. That means that demand now massively outstrips supply - and price tags are on the rise.  Cue, criminal gangs getting involved.

You can see the attraction. Non-specialist breeds of dogs fetch well over £2,000, while those in great demand such as French bulldogs can sell for more than £5,000. A litter can fetch £35,000.

Those returns are up there with trading drugs - and, thanks to the murky world of online pet advertising, a lot less risky. Incredibly, criminals have professionalised their operations to such an extent that they can now steal to order, deliberately targeting homes with expensive dogs.

And the more I look into it, the more it becomes clear that  violence is on the rise. I’ve heard of elderly dog owners knocked to the ground, hands stamped on and crushed, people hit when they resist and threatened with further violence. What’s more, even non-violent thefts can have far reaching emotional effects. A  dog is a sentient being, who is often seen as part of the family, particularly for elderly people living alone. As a dog owner myself, I understand the emotional loss.

The problem is that it is an easy crime to commit.  Even though it is compulsory for dogs to be chipped, vets are not obliged to scan the chips. And even if a dog has been scanned, there is a bogus microchip database - UKPetChipRegistry - that ‘registers’ your dog but the chip reads as unregistered. DEFRA knows this, but has yet to close it down.

Worse, the law considers the theft of a pet the equivalent of an inanimate object - such as a laptop or a TV. One victim I spoke to told me that, having told the police that her two dogs had been stolen from her car, she was repeatedly asked if anything valuable had been stolen - as if the theft of her two dogs was not serious enough to warrant police time.  Officials at the Home Office continue to insist that pet theft is already dealt with adequately, yet only 1% of dog theft cases investigated resulted in a charge in England and Wales. When thieves are prosecuted, most sentences are non-custodial and result at most in a £250-500 fine.

Anyone can see that if a handful of targeted thefts can net tens of thousands of pounds, criminals will just laugh at these light sentences.

In October 2020, 300,000 people signed a petition calling for the Government to make pet theft a specific offence.  I am behind them all the way.

Currently, everything from mushroom theft to bicycle theft has its own category, but pet theft is hidden in an ‘anything else’ umbrella for “personal items” which don’t fit elsewhere.  That is patently absurd. Now is the moment to act before - it is too late.

2020 has been the worst ever year for dog thefts – tougher sentences are needed for pet theft.

Although this may not make national news, for many, many families what is happening to their dogs is heart-breaking. 2020 has seen an increase in dog thefts of 250 per cent in some areas.