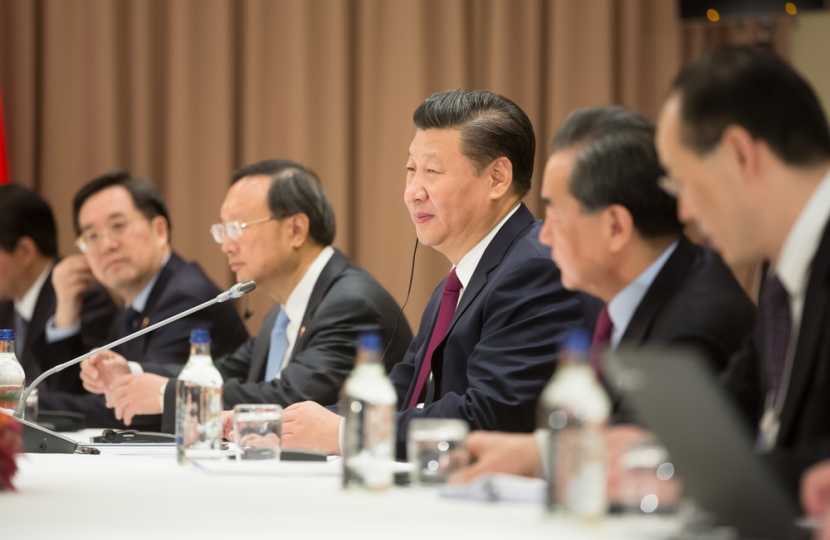 We cannot allow China's intimidatory tactics to prevent the truth about its many abuses being told.

The news on Thursday evening that I, alongside a number of parliamentary colleagues and other campaigners, had been sanctioned by the Chinese government did not come as any great surprise. There was always a good chance that Beijing’s aggressive attempts to silence critics at home and abroad would eventually be directed our way.

With no assets in China, no business links and no trips to China planned, it would be easy to shrug off what appears to be an empty threat. And, indeed, I am happy to wear these sanctions as a badge of honour. However, we should not ignore what is a serious – and far from isolated – act of hostility from a foreign power.

These sanctions, ostensibly in retaliation for UK and European sanctions on Chinese officials engaged in the systematic eradication of the Uighur people, have been deliberately aimed at legislators as a clear and public assault on the thing China’s leadership abominates – free speech. They carry with them a warning to the UK Government that should politicians like me persist in interfering in China’s affairs, there will be more to follow.

Such attacks are not new, but, under the direction of president Xi Jinping, they have been ramped up in recent times. Well might Beijing wish to silence its critics because there is plenty to criticise.

Over the past 10 years we have witnessed growing tensions on China’s borders, from the vicious dispute with India to incursions in the South China seas and growing threats to Taiwan. President Xi has trashed the Sino-British agreement on Hong Kong and persecuted those in the territory who campaign for human rights. In mainland China, many groups have been subject to grotesque oppression from attacks on Christians and practitioners of Falun Gong to the appalling genocide being carried out against the Uighur people and the continuing, but often forgotten, abuse being meted out to the people of Tibet.

Far from allowing Beijing to silence us on these abuses, we must remind ourselves that they are in need of constant publicity.

Sadly, the free world is not without blame for the way we have too often appeared to avert our collective gaze, as we aggressively pursued trade with China. In seeking an economic relationship with Beijing, too many countries and their institutions have become unhealthily dependent. Over the last 20 years, successive British governments have sold the lie that the more trade we did with China, the greater the influence we would have over their behaviour. Trade, we were told, would liberalise Chinese politics, ushering in a “Golden era” of cooperation, a sentiment still alive in parts of the establishment. Sadly, this in effect meant that trade frequently trumped other concerns – small wonder that the “Golden era” came to be known as “Project Kow Tow”.

The Government’s recent Integrated Review did not go far enough in reassessing our approach to China. We need to draw up plans to reduce our worryingly high dependence on Beijing and work with our allies and friends in the free world to spread that load. We could start by ensuring that companies online and offline make it very clear where the products people buy were made. Consumers should be able to exercise their choice to buy products that are not being produced with the use of slave labour, as has been the case with cotton grown by Uighur people in Xinjiang province.

Another area we must examine are Britain’s universities. There is a problem on campus, recently highlighted by Jo Johnson, the ex-minister for higher education and brother of the Prime Minister. Mr Johnson points out that rapid growth in both joint research programmes and the number of Chinese students studying here has created a “strategic dependency” on such partnerships, exposing British universities to risks, including a reliance on Chinese finance, intellectual property theft and exploitation. It is also worrying that some universities allow these Chinese students to be spied on by members of the Confucius Institute, who pay to be on campus and report back on the students.

When it comes to ending the worst abuses of the Chinese government at home, we should work with other nations to demand a UN investigation into the treatment of the Uighurs, with full access to the region.

The sanctions levied on myself and my colleagues are a blatant attempt to prevent us from raising these issues and to stifle the free and open debate that sits at the heart of our parliamentary democracy. Beijing should be warned: this intimidation will only encourage all of us who have been targeted to redouble our efforts. Speaking up for those who are suppressed and have no voice, such as the Uighurs, Tibetans, Hong Kongers and others cannot be stopped by Chinese diktats. When I think of what those people have had to suffer, I am humbled.

To paraphrase Gladstone, there is no greater bulwark against tyranny than the breasts of free men and women. This is a cornerstone of our democracy and it is a sentiment that from now on must determine our relations with oppressive and authoritarian regimes, no matter how powerful they may be.