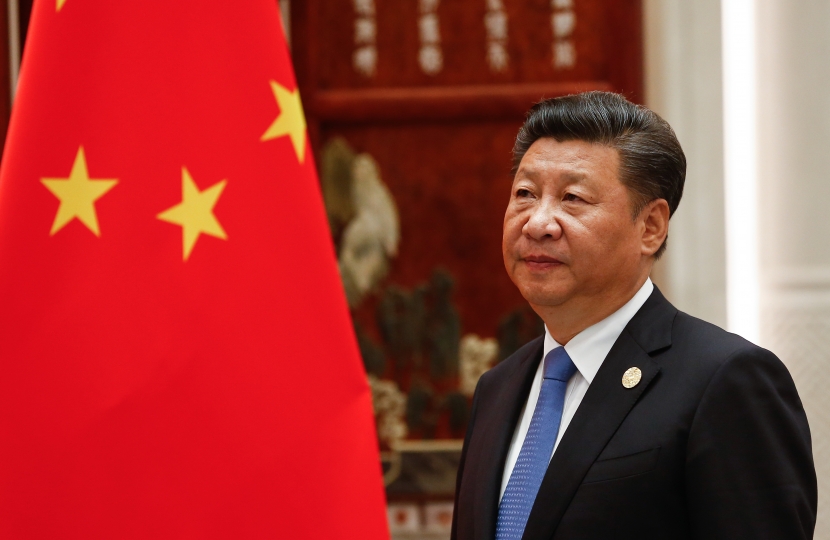 The release of the long-awaited Integrated Review, the overhaul of UK’s defence and foreign policy, shows that the UK is beginning to realise the scale of the challenges posed by China’s burgeoning global influence.

For the first time, China is recognised for what it is – the single biggest state-based threat to the UK’s economic security. The Chinese government have repeatedly coordinated cyber-attacks against UK targets and have turned a blind eye to industrial-scale intellectual property theft from British businesses.

Britain’s over-dependence on China for crucial medical supplies, dangerously exposed during our reliance on Chinese-made PPE at the onset of the pandemic, is also implicit in the report. The Covid death count worldwide is now over 2.5 million and China’s refusal to cooperate with the World Health Organisation (WHO) has shown that China is not a dependable partner on the world stage. We cannot rely on the Chinese government to be the gatekeeper for our critical supply chains.

The only way to meet this dual challenge is for the UK to develop a competitive edge in emerging and future technologies. The UK already leads the world in microchip technologies, through companies such as Arm and Graphcore and we must increase our investment in UK firms to maximise our advantage. Our capability must be stronger than those who seek to undermine us.

This will be no mean task. The Chinese state invests heavily in new technologies and gives unfair advantages to Chinese firms such as Huawei. As we have seen with the roll out of Huawei’s 5G across the developing world, if the free world cannot come up with viable alternatives China’s dominance will be accepted, whatever the political cost.

It is therefore welcome that the government is looking to work with allies to develop viable competition in the tech and cyber security space so that the free world does not have to depend on China.

However, we must go further. The Chinese government uses its trade and investment links with the UK to its own advantage. The Military-Civil Fusion strategy aggressively targets civilian technologies for military gain – such as artificial intelligence and drone technology – through intellectual property theft and commercial espionage if necessary.

Most strikingly, UK universities are playing a large part in helping the Chinese military achieve this technological advantage. Research suggests that over half of the UK’s Russell Group universities have conducted research in collaboration with institutions linked to the Chinese military and hundreds of British academics are being investigated on suspicion of aiding China’s weapons of mass destruction. The former universities Minister, Jo Johnson, has expressed fears that the government poorly understands the risks of increasingly close collaboration. Banning Chinese military institutions from funding UK university research is an urgently needed first step.

The UK cannot afford to be complacent about the threat posed by the Chinese state. Seeking ever closer trade and investment relationships with China risks undermining the good work done to build supply chain resilience and technological advantage elsewhere.

The government has been unequivocal about the hostile activities of states such as Russia, Iran and North Korea. Yet no such designation has been made for the Chinese state, despite repeated Chinese state backed cyber-attacks and attempts to intimidate and threaten UK residents on British soil.

While the UK has sanctioned Russian officials for the poisoning of opposition leader Alexey Navalny, no sanctions have yet been issued for the alleged genocide in Xinjiang, or the destruction of democracy in Hong Kong. Such acts must have consequences and we must ensure the Chinese Government understands that.

Previously governments have naively believed that trade would liberalise China, but the Communist Chinese Government believe their dictatorial system of government is better than ours. Their aggressive behaviour in both domestic and foreign policy looks set to stay. Knowing this, the UK must work with our allies to hold them to account.

The Integrated Review is a sign that the UK’s understanding of the Chinese government is moving in the right direction. Only a clear-eyed assessment of the threats posed by the Chinese state will ensure Britain is able to embark on its new global role.