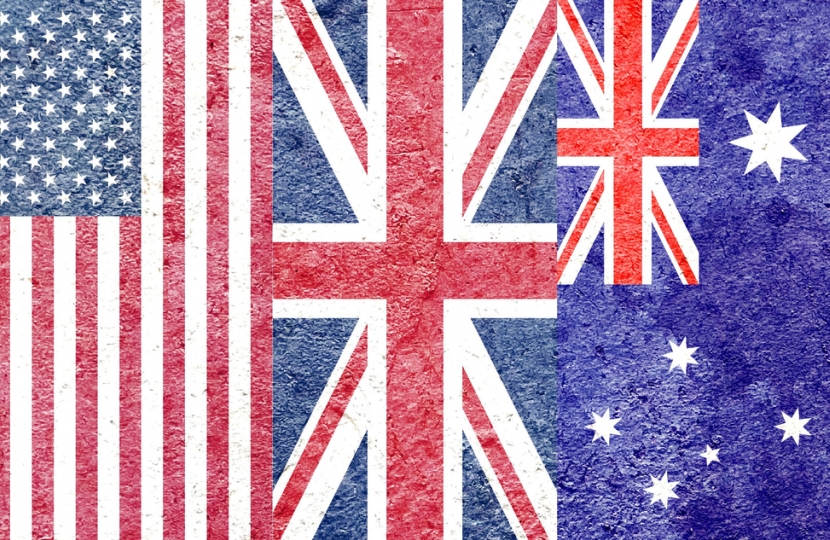 The decision of the UK, US and Australia to join together and form an historic security pact in the Asia-Pacific, known as Aukus, is the beginning of a new era for the free world’s relationship with China.

The agreement will allow Australia to build nuclear-powered submarines for the first time and follows the UK Government’s strategy of bringing together security, defence, development, and foreign policy. It will also align the UK to the Trans-Pacific Partnership (TPP) which is a critical trading alliance.

Aukus is an important defence agreement that will offer Australia the vital support of the two most powerful militaries in the free world. Australia has been under intense pressure since its Prime Minister called for an independent investigation into the origins of Covid-19 in China. China had already imposed huge tariffs and restrictions on Australian exports including wine, beef and barley, and banned outright coal imports.

The Aukus pact will enable Australia to push back. Australia will now be able to use its defence systems to protect the seas around them and challenge the Chinese naval expansion. This challenge is also vital as China has made no pretences about its bold ambition to have the largest military in the world.

China’s aggression was further encouraged following the US withdrawal from Afghanistan, which left Taiwan vulnerable and watching in horror at what happens when the US military do not stand by its allies. Prior to Aukus, China had taunted Taiwan that, “when the war comes” Taiwan could not count on US support. This was reinforced by near daily incursions of Taiwanese airspace by Chinese military aircraft.

The Aukus Pact is a good response to this taunt and shows that the UK and US – and I hope other free countries that will follow – will not allow China’s aggressive behaviour to go unchecked. An unnamed Taiwan National Security Official has said that “the creation of Aukus fills the most important gap in the security web of the entire western Pacific.”

China’s aggression abroad is only matched by its aggression at home. In May of this year Chinese forces objected to an Indian road construction in the Galwan river valley, a skirmish which resulted in the death of 20 Indian soldiers. This is on top of the appalling treatment – which many in the international community have named genocide – of the Uighurs, the widespread persecution of Christians and the Falun Gong and increased intimidation of the people groups in Inner Mongolia.

China has also trashed the Sino-British agreement and stripped away the residual rights of Hong Kongers. The CCP now lock up pro-democracy supporters under the auspice of terrorism charges.

Only if the free world comes together can we meet this challenge in a reasonable way. When dictatorial regimes make clear their intentions, democracies around the world should understand that these regimes mean what they say.

We should learn the lessons of the 1930s where appeasement resulted in 60 million dead in the most brutal of wars. The 1930s show that conciliation with tyrants does not work.

Aukus is the beginning of a reset in the relationships and alliances in the Far East. I believe it marks the start of democracies pushing back and rethinking the relationship between China and the free world.