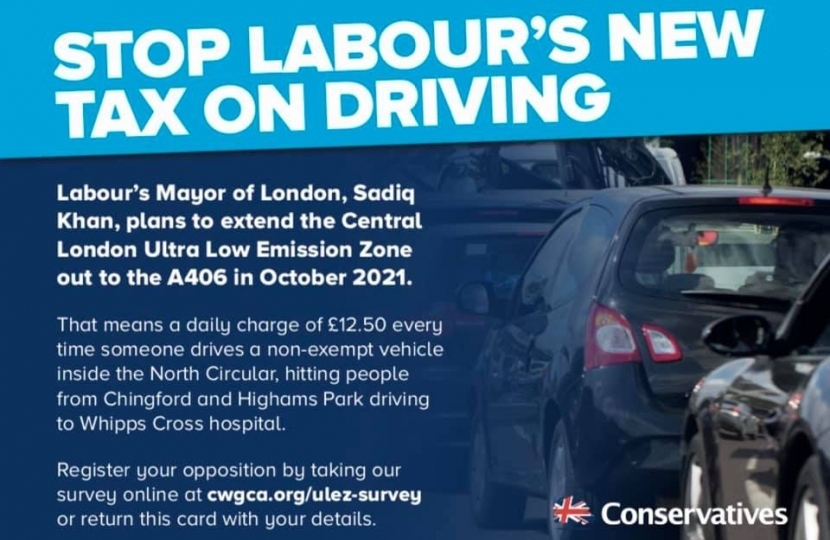 The Mayor of London, Sadiq Kahn, is trying to pass the cost of his financial mismanagement to drivers by charging up to £33 a day to drive from outside of London into the centre. Sadiq has proposed a Greater London Boundary Charge of £3.50 — or £5.50 for non-environmentally compliant cars — for cars crossing into a zone that roughly maps to the M25.

Each year this would affect an estimated 1.3 million drivers and cost residents £1,000. The charge is in addition to the £12.50 ULEZ fee, which the Mayor is expanding to the North and South Circular at the end of this year, and the further £15 cost of driving into the congestion zone in central London.

Many of the vehicles that cross the London boundary are essential service vehicles such as plumbers and electricians, or key workers and shift workers who can’t afford to live in the capital and the elderly attending hospital appointments, in our case travelling to Whipps Cross Hospital.

The taxpayer has already funded a £3.4 billion bailout for Transport for London (TfL) and yet the Mayor is astonishingly asking the Government for a further £1.4 billion despite already reducing certain services, such as buses, by 4 percent. In 2019, well before Coronavirus hit, the Mayor had already announced an above inflation hike in fare prices of 2.6 percent.

Burdening ordinary people with high costs because of the Mayor’s failure to balance his finances is a disaster. Londoners shouldn’t have to foot the bill for Sadiq’s mismanagement.

Real leadership, not a weak mayor

London is one of the greatest cities in the world. A leader in entertainment, the arts and financial services and the home of parliamentary democracy.